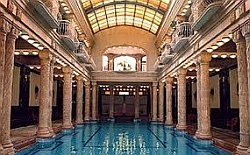 The thermal resources of Budapest are unique in the world. On the territory of the city 120 natural springs rise (most of them with warm water). The water raising from natural and drilled springs are usually between 21 and 76 °C and give daily 30.000 quadtratmetre water.

Already during of the Romans Imperio used the warm springs of the Buda-hills. According to memos during the Roman times there have been 14 baths in the city, while during the Turkish rule 8. Most of the baths originating from the Turks are still operating.

Today Budapest has 24 thermal baths, swimming pools and open-air pools, from which 10 are thermal baths. Thermal water containing calcium, magnesium, hydrogen-carbonate, chloride, sulphate, alkalis and a significant amount of fluoride. There are very god for the people with pain in the artucular joints, and for rheumatic disease, and for everybody who just want to have relax.

The most important thermal baths in Budapest:

You can see more: www.budapestgyogyfurdoi.hu