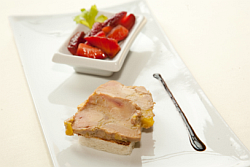 The character of the traditionally heavy and spicy Hungarian Cuisine was influenced by the sophisticated tastes of the French, Italian, Turkish and Serb Cuisine. The paprika is often related being characteristic to the Hungarian Cuisine. The truth is that paprika is the elementary substance of lots of Hungarian dishes, however we have exquisite delicacy and Noblesweet paprika that give the colour and aroma of the paprika, but are actually mild. 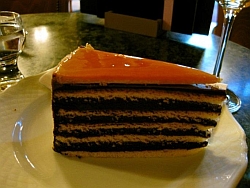 and the deserts like Dobos torta ( in the foto)  or Gundel pancake (Gundel palacsinta), Somloi galuska and chestnut puree (Gesztenye püré).

The yearly wine production of Hungary is hl. 4,2 million, that is ripened in the 22 historical wine regions like Tokaj, Villány, Eger and Balaton. Budapest also has a significant storing and bottling capacity. There are a lots of wine stores and wine-tasting places in Budapest.

Also we have to metion the most famous spirit, called: Pálinka, made of hungarian fuits,(expl. plum, apricot, pear, and cherry, and aslo apple) containes min. 40° of alcohol. 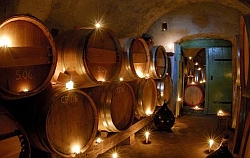